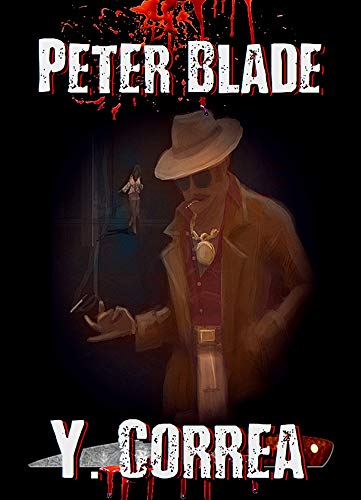 I am delighted to help get the word out about Y. Correa’s new release, Peter Blade, a psychological drama, slated to release October 31, 2018, at all major book retailers.

A single night can carry both contempt and horror.

The notorious Peter Blade is on the hunt … just like many nights before. Adhering to his father’s words, “You’ve got to get deep into the gut, that’s how you’ll be able to bleed the animal. It’s the only way to get him clean …” Peter ensures that every hooker he kills is bled to pristine flawlessness.
Dancing with the phantasms of a murky past and the reality of an ominous present, Peter Blade trades places with his victims for the foreboding remembrances which cometh after dark. This night is entrenched in the unexpected and Peter finds himself contending with life and death. From dusk to dawn, Peter Blade is inescapably haunted but to what end? Which could be worse, living the terror or dying by its hands?

"What if?" Those two words all too easily send Devorah Fox spinning into flights of fancy. Best-selling author of “The Redoubt,” voted one of 50 Self-Published Books Worth Reading 2016, and three other books in The Bewildering Adventures of King Bewilliam epic historical fantasy series. She also co-authored the contemporary thriller, Naked Came the Sharks, with Jed Donellie. She contributed to Masters of Time: a SciFi/Fantasy Time Travel Anthology and has several Short Reads to her name, including Murder by the Book, A Mystery Mini. Born in Brooklyn, New York, she now lives in The Barefoot Palace on the Texas Gulf Coast with rescued tabby cats ... and a dragon named Inky. Visit the “Dee-Scoveries” blog at http://devorahfox.com.
View all posts by Dee →
This entry was posted in read and tagged read. Bookmark the permalink.