Holding back the hounds of hell 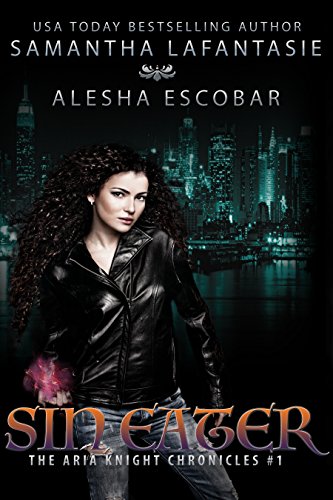 Aria Knight has an unusual set of skills: she will hold back the hounds of Hell so you can fly toward the Pearly Gates, and she will wipe your slate clean so that you don’t become karma’s bitch…for a price.

A Sin Eater has to make a living in today’s world somehow.

But when she’s called in the dead of night to perform her rite for a recluse billionaire, she stumbles upon a murder scene, and the evidence points to her.

In an attempt to clear her name and uncover the true culprit, Aria is forced to team up with a private investigator who’s possessed by three spirits, and a handsome wizard who would rather see all Sin Eaters like Aria go extinct.

I’m a caffeine addict and chocoholic who enjoys reading and writing engaging stories, loveable (and not-so loveable) characters, and expressing my creativity daily. I write fantasy with intriguing characters, action-packed scenes, and always throw in a good dash of humor and romance.

Science Fiction and Fantasy are my favorite genres, but I also adore the classics (Shakespeare, Dante Alighieri, etc.) and I have a soft spot in my heart for Victorian poetry. You can geek out with me all-day every day over these.

Some of my favorite contemporary fantasy authors are George R.R. Martin, Robert Jordan (rest in peace), J.K. Rowling, Neil Gaiman, Jim Butcher (Dresden Files made me love Urban Fantasy), and Ilona Andrews among others. I enjoy movies and shows like Sleepy Hollow, Supernatural, Arrow, The Flash, The Avengers…there are too many to name!

I want to read more comics and graphic novels, please shoot a recommendation or two my way (I LOVE the Hellblazer comics, by the way).

Please don’t be a stranger–I want you to kick up your feet, sip your coffee (or tea) and join in on my weekly rants, discussions, and updates.

A Kansas native, Samantha LaFantasie spends her free time with her three kids and arguing with her characters. Writing has always been a passion of hers, forgoing all other desires to devote to this one obsession. She’s primarily a fantasy writer but often feels pulled to genres such as sci-fi, romance, and others.

Samantha became a bestselling author with the Pandora Boxed Set (which includes Made to Forget: Nepherium Novella series–Part One) on both Amazon and USA Today.

Samantha loves to take time to enjoy other activities such as photography and playing her favorite game of all time, Guild Wars 2.