One of the fun things about being in the worldwide writer community is discovering so many talented authors. Today I’d like to introduce you to a new acquaintance, Rosemary Johns and her Rebel Vampire series. 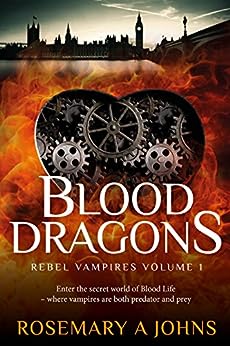 Escape into a supernatural world of love, revenge and redemption.

“In a precarious world where vampires are both predator and prey, Blood Dragons deftly blends elements of paranormal thriller and passionate romance… A character-driven, sizzling-hot saga” – Midwest Book Review

There are three people in this affair…and two of them aren’t human. In a divided paranormal London, Light is the rebel bad boy vampire of the Blood Lifer world, with a photographic memory. And a Triton motorbike. Since Victorian times he’s hidden in the shadows with Ruby – a savage Elizabethan. She burns with destructive love for Light. But he’s keeping a secret from her, which breaks every rule in Blood Life.

5* Highly recommended: ‘For anyone who is just looking for something a bit different, a bit edgy, something that will amuse you, frighten you and take you on one hell of a journey into love, death, humanity, and monsters’ – Underground Book Reviews

1960s London. Kathy is a seductive singer. But she’s also human. When the two worlds collide, it could mean the end. For both species.

“No ordinary paranormal romance…the beginning of something new.” – Vamped Magazine

When Light discovers his ruthless family’s horrifying experiments, he questions whether he should be slaying or saving the humans he’s always feared. Now he’s trapped in a race against time to save them all. The consequences of failure are unimaginable. Unless Light plays the part of hero, he risks losing everything. Including the two women he loves.

A rebel, a red-haired devil and a Moon Girl battle to save the world – or tear it apart.

“One of the most unique & ingenious vampire books I have EVER read …reminded me very much of Anne Rice’s The Vampire Chronicles” Leather and Lace Reviews. 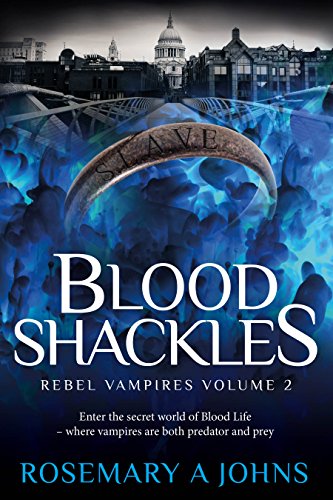 When your whole species is enslaved – and it’s the humans who are acting like the monsters – how far would you go to free your family?

5* “When Light is captured, he refuses to lose himself, despite how his captors try to break his spirit and force him into submission. Being sold to Grayse is the ticket he needs out of his cell, even though her father owns the company that enslaves him… Blood Shackles is brutally honest, tragic, triumphant, addictive, and somehow hopeful… Johns succeeded in creating a world, characters, and a story that pulled me in until I had to finish reading it… This is a novel everyone should read, along with Blood Dragons” – Readers’ Favorite

In a divided paranormal London, Light is the bad boy vampire of the Blood Lifer world. Since Victorian times he’s hidden in the shadows. But not now. When he’s bought by his Mistress, Light fights to escape. If he doesn’t, he’ll never solve the conspiracy behind the Blood Club.
5* “Light is back and he’s his usual charming, funny, wry, ballsy self… A story about the triumph of hope and love over evil.” – Margarita Morris, The Good Writer

WELCOME TO THE BLOOD CLUB

Who are these ruthless humans? And who betrayed the secret of the Blood Lifer world?

London, Primrose Hill. Grayse is the slaver’s daughter. She buys Light, like he’s a pair of designer shoes. So why does Light feel so drawn to her? Especially when his family is still in chains. Will he risk everything – even his new love – to save them?

A stunning revelation leads Light to an inconceivable truth. If he can face his worst terrors, he can save his family and his whole species from slavery.

Maybe he can even save himself.

5* “…you can’t put the book down…” – Rockchick Addiction Reviews 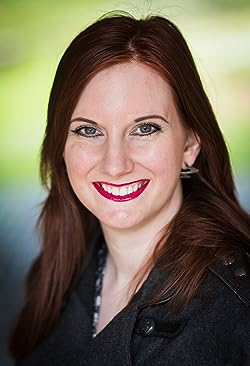 ABOUT ROSEMARY A JOHNS

ROSEMARY A JOHNS is author of the bestselling Blood Dragons and Blood Shackles – the compelling Rebel Vampires series. Blood Renegades is released June 2017.

ROSEMARY A JOHNS is a music fanatic and a lover of the anti-hero. She wrote her first fantasy novel at the age of ten, when she discovered the weird worlds inside her head were more exciting than double swimming. Since then she’s studied history at Oxford University, run a theatre company (her critically acclaimed plays have been described as “uncomfortable, unsettling and uneasily true to life”), and worked with disability charities.

When Rosemary’s not falling in love with the rebels fighting their way onto the page, she heads the Oxford writing group Dreaming Spires.

Rosemary A Johns is a Goodreads Author: https://www.goodreads.com/author/show/15571684.Rosemary_A_Johns

To sign up to Rosemary A Johns’ VIP Email Newsletter with news of hot releases, promotions and the free short story “All the Tin Soldiers”, click here: http://eepurl.com/bQ0kMX

You can visit Rosemary A Johns online at her fantasy website: https://rosemaryajohns.com

Other links to Rosemary: