Who won? Who lost?

OK, all you political junkies and sports fans. Here’s a chance to combine these two great passions. 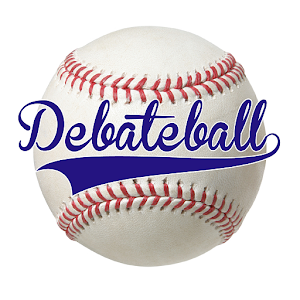 My guest today is a friend and former colleague, the inimitable Donna Schillinger, creator of a new, free app for Election 2016. DEBATEBALL uses a fun, baseball format to help voters determine how well (or poorly) presidential candidates perform during the debates. The app is available now on the Apple App Store and Google Play Store for free.

Donna, you’re up at bat.

DS: Thanks, Devorah, for this opportunity.

Oddly enough, in this week after Super Tuesday, there are four presidential debates scheduled: March 3, 6, 9 and 10. If you haven’t caught a debate yet, you don’t know what you’re missing. In years past they may have been pretty boring, but with candidates like Donald Trump and Bernie Sanders, there’s never a dull moment on the debate stage this election!

But the problem with debates is that we watch them and when they’re over, we have nothing more than a gut feeling about who we think won. I developed DEBATEBALL to elevate voters’ level of debate analysis.

With DEBATEBALL, you’re using a fun format to track your analysis all the way through the debate. The app user is the umpire and candidates are the batters. Each candidate’s response to a moderated question is scored as follows:

The voter continues to select batters and make calls, keeping pace with the debate moderator. At the end of the debate, it’s simply a matter of checking the app’s Scoreboard to easily see who won, in the voter’s opinion as the umpire. Scoreboards can be shared via Facebook or Twitter to collaborate on decision-making.

My goal with DEBATEBALL is help swing voters, undecided voters and even people who think they know which candidate they like to better engage with presidential debates. Instead of drinking games or mouthing off on Facebook or Twitter, DEBATEBALL users are thinking critically to come to a more logical conclusion about the candidates.

This is something we have traditionally relied on commentators to do. But we don’t need a news network to tell us who won the debate. That’s a call American voters can and will make for ourselves, thank you very much. So please, if you love our country, gear up, download Debateball, and engage in democracy.

Check it out. Watching the debates will never be the same.

"What if?" Those two words all too easily send Devorah Fox spinning into flights of fancy. Best-selling author of “The Redoubt,” voted one of 50 Self-Published Books Worth Reading 2016, and three other books in The Bewildering Adventures of King Bewilliam epic historical fantasy series. She also co-authored the contemporary thriller, Naked Came the Sharks, with Jed Donellie. She contributed to Masters of Time: a SciFi/Fantasy Time Travel Anthology and has several Short Reads to her name, including Murder by the Book, A Mystery Mini. Born in Brooklyn, New York, she now lives in The Barefoot Palace on the Texas Gulf Coast with rescued tabby cats ... and a dragon named Inky. Visit the “Dee-Scoveries” blog at http://devorahfox.com.
View all posts by Dee →
This entry was posted in arts&crafts, play and tagged play. Bookmark the permalink.