Coffee with the author

Before I moved to Texas I lived in Phoenix, Arizona. Scottsdale, the next city over, was home to a world famous bookstore. The Poisoned Pen specialized in mysteries and thrillers. The shop was so well known that stopping there was an absolute must for any author on a promotional book tour.

Authors like Michael Connelly, James Lee Burke, Earl Emerson, Harlan Coben and others did more than simply sign and promote sales of their books. They served on panels or were guests at author chats. Fans of their works could sit and listen to their favorite authors talk about the tribulations of trying to get published (James Lee Burke received 114 rejections before finally getting a novel accepted for publication; it took Jonathan Kellerman eight years to get a novel accepted). The authors talked about whether they worked in offices or coffeehouses, whether they wrote full time or tried to squeeze writing in between holding down a job or maintaining a home. They revealed if they got up early to write, or stayed up late, if they created an outline first or just winged it.

I now have a shelf full of books signed by authors I admire, even home addresses and treasured personal correspondence. And I learned a lot from them, not only about how their books came together but about life and work as a novelist.

I’ve missed that resource—until now. The Friends of the Library has started a series called Coffee with the Author held at the Ellis Memorial Library in Port Aransas. The Friends invite a local author to read from his or her work and take questions from the audience. Attendees can ask anything. (OK, maybe not “boxers or briefs?”)

I was thrilled to be the first guest author. Where once I sat in the audience, now I was the one answering questions. I read a scene from my most recent work, The King’s Redress, and managed to talk for about two hours about where I got the idea for my epic fantasy book series, whether I thought print books were dead, what it was like to collaborate with three other writers on Naked Came the Sharks (the coastal thriller that we co-authored), and answered a host of other questions.

Now it’s my turn to sit in the audience again because the next Coffee with the Author will feature Ruth Matlow Asher. A writer of beautiful poetry, engaging fiction and nonfiction, Ruth has penned The Secrets of the Snow Queen, two chapbooks, Inside Yesterday and Elephant of Japan, poetry published by Texas A&M, University of Texas and Rogers State University, and articles in The Prairie Journal, Fieldstone Review and The Nashwaak Review. Ruth’s nonfiction won awards in the Winnipeg Free Press and the Writers Collective. A Winter Texan, Ruth lives in Manitoba when she’s not in Port Aransas. 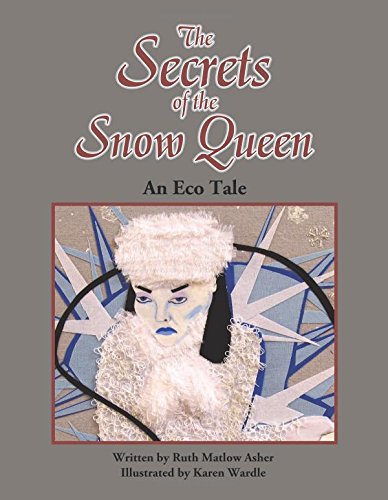 She refers to The Secrets of the Snow Queen as an “eco-tale,” a story with an underlying environmental message about food, animals and living in harmony with nature and one another. It’s a children’s book that adults can enjoy (or maybe it’s a book for grown-ups that children like.) It’s also a work of visual art: the illustrations are photos of fabric collages by Karen Wardle.

Come Saturday, April 25, beginning at 10 a.m. No RSVP necessary. The Friends of the Library will have coffee and snacks on hand. Ruth will have copies of her book available and you can also get it on amazon.com.

"What if?" Those two words all too easily send Devorah Fox spinning into flights of fancy. Best-selling author of “The Redoubt,” voted one of 50 Self-Published Books Worth Reading 2016, and three other books in The Bewildering Adventures of King Bewilliam epic historical fantasy series. She also co-authored the contemporary thriller, Naked Came the Sharks, with Jed Donellie. She contributed to Masters of Time: a SciFi/Fantasy Time Travel Anthology and has several Short Reads to her name, including Murder by the Book, A Mystery Mini. Born in Brooklyn, New York, she now lives in The Barefoot Palace on the Texas Gulf Coast with rescued tabby cats ... and a dragon named Inky. Visit the “Dee-Scoveries” blog at http://devorahfox.com.
View all posts by Dee →
This entry was posted in arts&crafts, events, read and tagged arts&crafts, events, Port Aransas, read, Texas. Bookmark the permalink.

One Response to Coffee with the author